I’ve started working on some new Halloween decorations. One of my favorite places for svg files is 3d svg.com. Leo has awesome patterns and almost every project has a video with step by step instructions with how to put it together. The videos are very easy to follow even for a novice. And Leo has first class customer service. I purchased a file that when cut out on my Cricut had a cut line that shouldn’t have been there. I tried to remove the cut line but was unable to. I emailed Leo about my problem and he responded very quickly that it was a problem with a recent Cricut upgrade that he thought Cricut had resolved. Since the problem was not fixed he emailed me a new file that was fixed very quickly. I really appreciate good customer service.

Recently I purchased a  bundle of Halloween projects from 3dsvg  – Fright Night Decor SVG Bundle– that included 2 projects that I have already done.

The Bumpkin Pumpkin – I only made the medium and small ones & the Spooky Banner. There is a supply list included so you know exactly what Leo used to make the projects. On the Bumpkin Pumpkins I didn’t have any green rafia that was used behind the flower so I cut strips of green cardstock about 1/8″ wide and curled them on a dowel and glued them behind the flowers. Also I used brown cardstock instead of burlap paper for the tops. 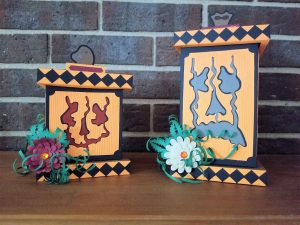 The Spooky Banner I used purple glitter cardstock for the bow. I bought Halloween tulle – black with orange bats- to use to hang the banner. 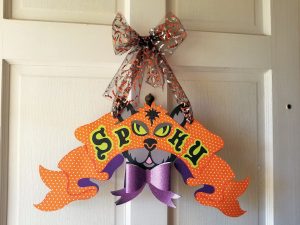 I also have a free file from 3dsvg.com a Candy Corn Witch Box. I made these for my co-workers and they loved them. The witch hat comes off and you can put candy on the inside. 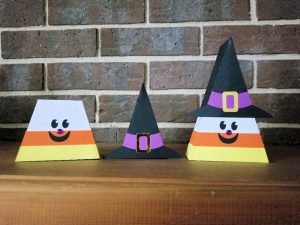 If you’re looking for  projects to use with a cutting machine check out Dreaming Tree 3dsvg.com